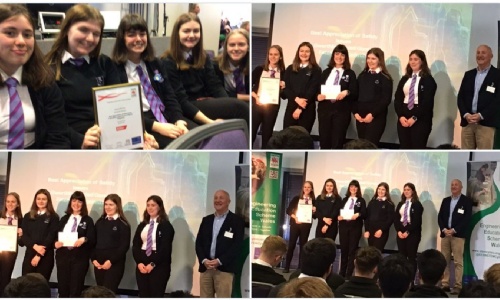 On Wednesday 4th May, five year 12 pupils presented their plans for a new railway bridge at Bedwlwyn Road, Ystrad Mynach.

This was the culmination of several months of extra-curricular work with an engineer from Transport for Wales as part of the annual EESW competition for Year 12 students.

The pupils (Amelia, Lowri, Kayleigh, Lucy and Emily) had the opportunity to present their designs to a panel of assessors and engineers at the final, held in Cardiff City Stadium.

Their brief was to consider how Transport for Wales could increase the height of the bridge to allow for the electrification of the Cardiff to Rhymney line.

Of the forty-six teams presenting, only three were nominated for ‘Best Appreciation of Safety Issues’ and we were extremely pleased to be announced the winners!